Manchester United continue to be linked with a move for Barcelona’s Ousmane Dembélé after they failed to take him on loan late in the last summer window.

Last week, Sport reported the Red Devils will go on the ‘attack’ for the winger in the next market.

The 23-year-old will have a year left on his contract at the end of the season and Mundo Deportivo explain he’s at crossroads of his career.

Dembélé needs to be decide whether to sign an extension, change clubs in the summer or stay for one more year at the club and leave as a free agent in 2022. All this while he continues to attract attention from elsewhere.

It’s claimed Manchester United and Juventus are the two sides ‘moving the most’ for the France international.

Ole Gunnar Solskjaer’s side want to bolster their attack in the summer, and have followed the former Borussia Dortmund man’s evolution for many months.

According to the report, Manchester United moved for the player in the winter market by holding talks with his representative and the contact with his agent is ‘fluid’. 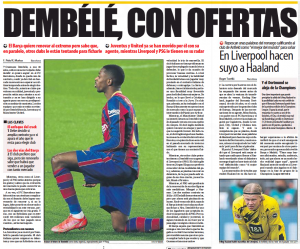 Barcelona are in a difficult situation with Dembélé.

The Spanish giants will look to convince him to sign a new deal and if they fail to do so, Barca will make the wideman available in the next window.