A couple of years ago, when reading the Portuguese media, we became used to seeing a Sporting player with impressive scoring stats being linked to several Premier League clubs.

That was Bruno Fernandes, who following a €55m move to Manchester United in January 2020, continues to show outstanding numbers to this day.

Now it’s very hard to see the stories about Pedro Gonçalves and not find any similarities to the path of the Red Devils’ star.

Pote, as he’s also called, currently has 14 goals and two assists in 15 games in the Portuguese league, which obviously makes him the man of the moment at Sporting.

Following his brace against Marítimo at the weekend, newspaper Record now brings a piece claiming that the Lisbon side will do their best to hold the player in the next summer  window and use him in the Champions League next season.

The outlet highlights all the numbers which prove how good his first season with the Lions has been, as he’s only needed 23 shots to score his 14 goals, and none of them were penalties. 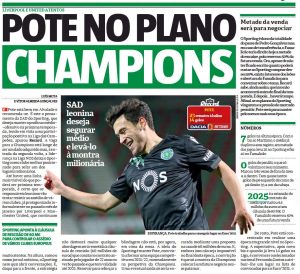 That’s why Sporting now plan to have him for a little longer. So after having closed doors to Manchester United, who have already made informal contact, in January, the club will keep their stance now and only let Pote go in case his €60m release clause is triggered.

When signing him in a €6.5m deal from Famalicão last summer, Sporting agreed to leave 50% of a future move to his former club. So that’s one more reason why they don’t want to negotiate a fee for the winger.

With Manchester United keeping a strong scouting mission in Portugal since José Mourinho’s time at the club, it’s quite obvious that Pote’s season won’t go unnoticed. Record says the club ‘continue to be very attentive’ to him, so perhaps it’s a matter of time before that informal approach turns into something more.

Liverpool are also said to be keen.