The midfielder has not been a vital figure for Los Rojiblancos in their title winning campaign, and is looking for a way out in the summer.

These claims are relayed in Monday’s edition of Mundo Deportivo, as they state the 26-year-old is ‘determined’ to leave the La Liga winners.

Diego Simeone’s side ‘would not frown on’ the Spain international’s departure and even though he has a €150m release clause in his contract, that expires in 2026, they would accept an offer around €80m for the player.

The problem is it won’t be easy for Atlético to find a club that’s willing to meet their €80m demands. 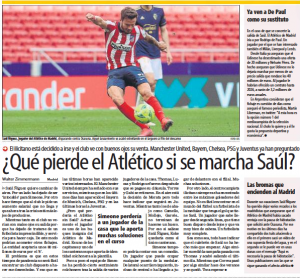 According to the newspaper, several ‘interested parties have appeared’ in the last few hours. Among them are the Red Devils, who have ‘always dreamed’ of signing Saúl.

Even though Ole Gunnar Solskjaer’s side have ‘dreamed’ of bringing the Atlético star to Old Trafford, Mundo doesn’t make it clear if Manchester United are ready to offer the €80m fee desired by the Madrid club.