With this new partnership between Manchester City and Sporting, it seems we’ll have a lot more transfer rumours to cover from now on.

The latest one comes from two Portuguese papers today: Record and O Jogo. Both outlets says Thiago Almada has become a target for the clubs.

Manchester City are said to have been following him for a while now, according to Record, and the first contacts for the signing have already been made. The English club would help Sporting afford the signing.

O Jogo even talks about a ‘future option’ for the Citizens, so perhaps he could move to Sporting on a permanent deal, with Pep Guardiola’s side having a priority for the future. 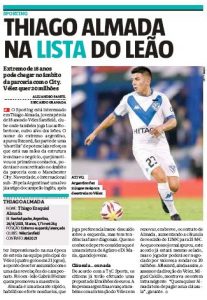 There are also claims from Argentina about this chase. TyC claims that Sporting and Manchester City would be preparing a bid of €12m for Almada, with the Premier League side funding part of it.

That shouldn’t be enough, especially because Almada is about to renew his contract with Velez, increasing his release clause to €25m.

Velez official Miguel Calello has spoken to Record about it, and said that anyone “who wants Almada will have to pay for the release clause”.