A target for many Premier League clubs because of his relatively low release clause during his time at Betis, Fabián Ruiz decided that instead of trying out England, he’d give Italy a go.

Since moving to Napoli, the midfielder has gone up a level in his performances, flourishing under both Maurizio Sarri and now Carlo Ancelotti, and it hasn’t gone unnoticed.

Real Madrid have long been fans, but other clubs around Europe, such as Manchester City, have also been taking notes.

A few rumours of interest have emerged here and there, and Il Mattino in Italy explain Pep Guardiola’s side are one of the three main keen sides, alongside the aforementioned La Liga side and Barcelona. 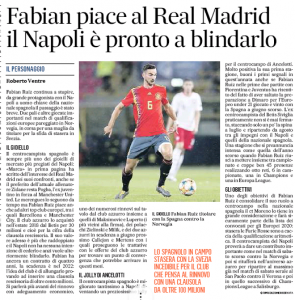 Napoli, however, have no intention of selling the 23-year-old, and plan to tie him down to a new deal that would see his wage increase and a release clause of around €100m being inserted into the contract.

As we all know with Kalidou Koulibaly and Gonzalo Higuain, if Aurelio de Laurentiis has a release clause in one of his players’ contract, he sticks to it, so this could make life complicated for the likes of Manchester City if they are keen on bringing him to the Etihad.

One to certainly keep an eye out for.