Having already covered this story a couple of times, it’s fairly clear that Milan have some interest in Arsenal’s Lucas Torreira, regardless of how difficult it would be for the Italians.

The reason behind this is Marco Giampaolo’s appointment as Gennaro Gattuso’s replacement at the San Siro, the man who helped develop the Uruguayan into the player the Gunners fell in love with last season.

Spending £27m on the defensive midfielder, Arsenal acquired a very talented footballer who enjoyed a good first season under Unai Emery, suggesting they will not be willing to let him go in the next couple of months.

Regardless of this, Marco Giampaolo has placed his former pupil ‘at the top of his list’, according to Gazzetta dello Sport, giving his new team a headache from the off. 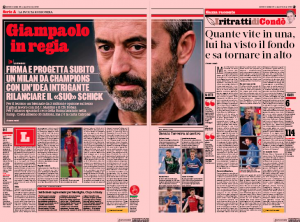 The Italian newspaper discuss the comments made by Torreira’s agent on Wednesday, who revealed a phone call from his client’s former manager would be ‘special’, and stick the knife a bit further in by claiming the 23-year-old’s experience in England ‘hasn’t seduced him’.

Gazzetta are suggesting the former Sampdoria starlet wouldn’t mind returning to Italy if he got the chance, which would cost them ‘at least €35m’.

That seems awfully low, as did the previously reported €40m, but if he really isn’t happy, perhaps they simply hope he can force his way out of the Emirates for a fee that would allow Arsenal to make their money back and a bit more.

This all sounds far too convenient, if you ask us, and we’ll have to wait and see how this develops before jumping to any conclusions about Torreira’s true feelings in all this.