Manchester United’s scouts are always on the lookout for young talent around Europe, and, according to L’Equipe, they’ve found someone they like in the form of Benoit Badiashile.

The 16-year-old centre-back, currently playing for AS Monaco with his older brother Loic, was apparently the subject of a bid from Manchester United last autumn, as the club attempt to add more promising players to their academy.

Left-footed, the defender has been of interest to a number of other clubs too, such as Juventus, RB Leipzig and FC Barcelona. 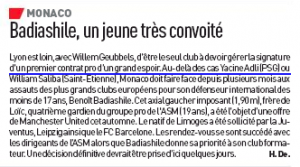 Badiashile is said to be favouring a stay with AS Monaco, where he already plays in the UEFA Youth League for them, and a number of meetings have already taken place between the centre-back’s representatives and the board to get his first professional contract done and dusted.

L’Equipe expect a definitive decision to be taken in the coming days, which is something José Mourinho’s staff will be keeping an eye on in case the youngster decides to look elsewhere.

One for Manchester United to keep an eye on.