Home Europe Man United and Man City have been ‘on defender’s trail for months’...
SHARE

On Monday, it was revealed by Corriere dello Sport that Manchester City had joined the race to sign Marash Kumbulla from Verona.

The young centre-back has been in great form in his first season as a starter for the Serie A side, and attracted a lot of interest from around Europe.

Manchester United and Everton had been linked over the course of January, but Corriere’s mention on Monday was the first we’d seen from Italy for the Cityzens.

However, according to Gazzetta dello Sport, their interest isn’t anything new, as they claim scouts from both Ole Gunnar Solskjaer’s side and Pep Guardiola’s have been ‘on his trail for months’.

As was explained in Monday’s article, that Manchester City are keen isn’t a surprise following their many injury woes at centre-back this year, with both Aymeric Laporte and John Stones missing large chunks of the season. 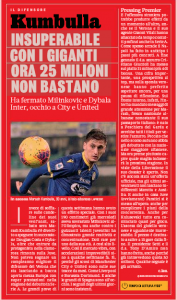 That led Guardiola to turn to Fernandinho as a makeshift defender, which wasn’t part of the plan going into the campaign.

With Nicolás Otamendi entering the latter years of his career, next summer could be the ideal time to bring in a new, young and talented centre-back, just like Kumbulla.

That is, of course, if Manchester United don’t spring first.

As for the price, it’ll need to be at least €30m, but if his performances continue to impress, it wouldn’t be a surprise to see Verona ask for more in the summer.