Since the Premier League side’s intention is to buy the player and loan him out to Sporting, this is an operation which could still happen this summer.

Now it turns out that some interesting updates come from the Argentine press, saying the winger could indeed be leaving his club sooner than expected.

Newspaper Olé reports that Almada has turned down the chance to renew his contract with Velez. And since his deal expires in June 2020, the Argentine side would rather sell him for little than let him leave for free. 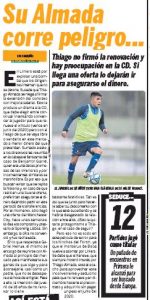 Olé says it were Manchester City who have made the only bid for Almada so far, and it was rejected a couple of weeks ago.

By the time Velez sarsfield said no, they were expecting the player to sign a new deal, raising his release clause from €16m to €25m.

Now the Argentine side are surprised with the situation, and are afraid they could lose a starlet for much less than expected.