Liverpool are one of the clubs chasing Espanyol’s Leandro Cabrera.

This is according to Mundo Deportivo, who claim Real Betis have joined the Reds in the race for the centre-back.

Regarding the Merseyside club, the newspaper provides a short update, stating that Jürgen Klopp’s ‘interest’ in the 29-year-old ‘comes from afar’.

Mundo have relayed claims made by PericosOnline, on the Uruguayan and Raúl de Tomás’ situation.

The latter’s report suggests the two players can leave the Spanish side, if the La Liga side are relegated. Their drop to second division was confirmed after suffering a 1-0 defeat to Barcelona in the derby.

It’s claimed clauses in their contracts will allow the defender and the striker to go out on loan to a top tier club, as long as the full wages are taken care of.

Cabrera joined Espanyol from Getafe at the start of this year and earns around €3m per season. 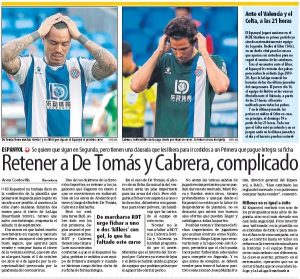 Liverpool are likely to bring in a new centre-back this summer, with Dejan Lovren potentially leaving Anfield.

With Cabrera available on loan and affordable wages (€3m per season), he could be a cheaper option for Liverpool in the post pandemic market.