With his options under Jurgen Klopp likely to be very limited for the coming season, the 21 year old needs a loan, otherwise he’s going to end up playing most of his games for Liverpool’s U23 side.

Ojo has already been on three loans from Liverpool, first Wigan Athletic, then Wolves, and last year he spent the season at Fulham.

Given all of that Championship experience it’s a surprise there hasn’t been a club there able to seal a deal for the winger, but there’s still a few days left to change that.

Tuesday’s edition of L’Equipe makes it clear that a move to France is also an option for Ojo. 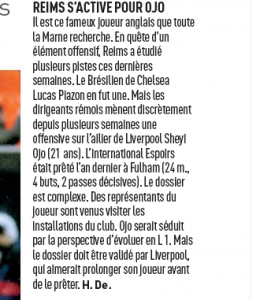 player, and it’s claimed Ojo’s representatives have even visited the French club’s facilities.

Ojo is said to be ‘seduced’ by the option of playing in Ligue 1, but it’s stated Liverpool want to renew his contract (which runs until 2020) before agreeing to a loan.

Time is running out.