If you’ve been keeping track of things on Sport Witness this week, you’ll know we’ve done a lot about Victor Osimhen and a potential move to Liverpool.

The Nigerian striker has looked extremely likely to join Napoli for much of the summer, and that deal looked set to be concluded at some point in the near future.

Then there was an about-turn in the process. Osimhen changed agent, talks hit a wall, and suddenly Liverpool were in the race for him.

A report yesterday indicated that Jürgen Klopp had specifically asked Liverpool to sign the striker and, that request had turned his head and put the Reds right at the front of the queue for his signature.

Well, the situation has been covered in both the French and Italian media today, and it seems there’s bad news for Liverpool. First, there’s L’Equipe.

They explain that the change of agent ‘remains the main issue’ in the talks with Napoli, mainly because his former representatives have threatened Napoli with legal action.

While that’s all going on, Osimhen has been ‘the subject of a number of revivals from English clubs’, Liverpool among them.

However, he is said to have ‘declined’ this interest and instead confirmed to any new suitors that he’s joining Napoli. 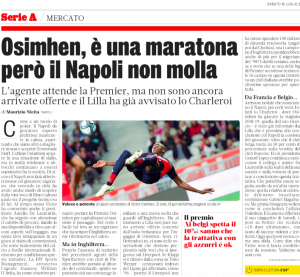 Gazzetta Dello Sport say similar, reporting that Napoli are working on getting a deal done, but Osimhen’s family are encouraging him to move to England.

Luckily for the Italians, though, there have not been ‘any concrete offers’ from England for him, particularly from Liverpool.

The newspaper then covers how any approach from the Premier League champions would be odd given they already pulled out of a move for Timo Werner this summer because it was going to cost too much.

Thus, if they don’t have €50m to spend on the German – who as you know is joining Chelsea – how are they going to afford the €98m for Osimhen. In short, it’s a rumour that simply doesn’t make sense, even if the Lille player will likely move for less than that quoted price. 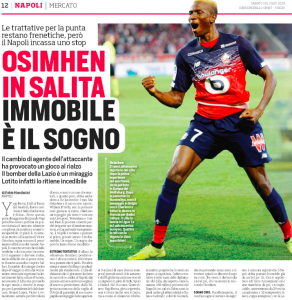 Corriere Dello Sport, meanwhile, offer a little more optimism but again say it is the agent, Willaim D’Avila, who is pushing the Liverpool rumours.

They say he, and Osimhen, ask ‘for a richer gig’ and thus are dealing with Liverpool, Tottenham and Manchester United to find it.

However, the newspaper does make clear that the rumours are coming from England, rather than anywhere in France or Italy, whereas we’ve shown you here, it’s a very different story.

The conclusion to take would be that his new agent is using Liverpool to boost the deal up, with Gazzetta and L’Equipe both indicating there’s no genuine interest from Anfield.