The agent of Manchester City star Kevin de Bruyne, Patrick de Koster, has insisted his client was never going to leave the club this summer.

De Bruyne was linked with a move away from the Eithad for much of the summer, with reports suggesting that he could leave should the club’s ban from the Champions League be upheld.

City, of course, were banned from UEFA’s top competition earlier this year with UEFA claiming there had been financial irregularities in their accounts.

The ban was appealed at the Court of Arbitration for Sport and has subsequently been overturned, but the sentiment was that many of Manchester City’s stars could look to leave rather than lose two years of European football.

That, though, was never going to happen according to De Koster, who says his client is happy in Manchester.

“People asked me all the time if Kevin would leave without the Champions League,” he told Het Laatste Nieuws.

“Some tabloids are just looking for thrills… Kevin is very happy in Manchester with his family; he; he gets appreciation and plays on good terms.

“And with one of the best teams in the world. In the best league. In the Premier League you play a final every week.”

Despite a move not being on the cards this summer, interest in De Bruyne is likely to be high given the level he has shown since moving to the Eithad.

The Belgian has established himself as one of the best players in the world in recent years, particularly under Pep Guardiola, and that will always court interest from the world’s biggest clubs.

However, De Koster insists there’s never been any calls for his clients, despite him enjoying strong relationships around Europe.

“There’s always interest in players of Kevin’s calibre,” he said.

“But they don’t call.  They might, huh. I know the people of Barcelona or Juventus, for example, very well.

“I can still email Marina Granovskaia (director at Chelsea, ed.) if I want a ticket. But I’m not taking advantage of that.

“If it really should, then it can go fast. We’ve got the direct contacts. Juventus or PSG – I’ll name just two – know it’s just for now.

“I haven’t even got any calls in the last few months. Again, we’ve never taken any steps to force an exit…”

Naturally, Manchester City will be keen to tie De Bruyne down to a new deal as soon as possible and ensure it is the Eithad where he is shining in the near future.

The midfielder currently has a deal until 2023, so there is no rush from either party to agree on an extension at this stage.

Should one be agreed, De Bruyne will likely become the biggest earner at the club, never mind in the Premier League, although that’s not a priority for his agent. 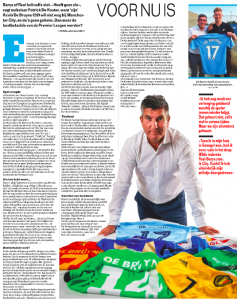 “I’ve never signed an extension where the player suddenly gets less,” he added.

“That’s not happening; it’s not going down. Not even in corona times. But we’re in no hurry.

“I don’t care how much I get, as long as I have most of everybody. We don’t reason like that. What’s coming, that’s coming.

“His impact on City is great. It would be abnormal if Kevin didn’t become the ‘Player of the Year’ in England. Allez, that’s what I think. He’s one of the best five worldwide.”