Sevilla are keen to sell defender Diego Carlos this summer, with Liverpool and Manchester City both in the race for his signature.

Carlos has impressed in La Liga this season following a move from Nantes last summer, with numerous impressive performances earning him admiring glances from the Premier League.

Liverpool have long been linked to him, with it felt that Jürgen Klopp is on the hunt for a centre back to compliment Virgil van Dijk in the heart of his defence.

Brazilian Carlos is reportedly seen as a player who would fit in perfectly but, if they are to make their move, they now face competition from Manchester City.

Reports over the last week or so have indicated Pep Guardiola’s side are targeting the centre back, with the Spanish boss also keen to improve his defence this summer.

Well, Marca have covered the situation today and claim that both clubs are very much in the hunt for Carlos and they will face little resistance from Sevilla if they move.

The newspaper explains that while Sevilla are not short on cash after qualifying for the Champions League, they are eyeing up the chance to make a ‘strong capital gain’ on some players.

Diego Carlos is one of them, and it’s claimed they are ‘looking forward’ to selling him because they believe they can replace him with someone more reliable. 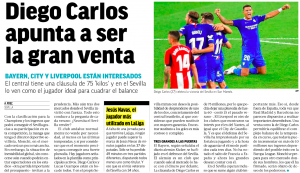 Liverpool and Manchester City have both ‘showed interest’ in him and are impressed by his ‘strength in the game’ and his ability to play games every three days with little issue.

Sevilla are hoping for ‘more important clubs’ to join the race although they will have to be from outside of Spain as neither Barcelona nor Real Madrid seem willing to spend big this summer.

Selling Carlos would help balance their books and allow them to invest, with them set to make a €60m profit if any of his suitors match the €75m release clause in his contract.

That seems unlikely in the current climate, although it’s not made clear if Sevilla will accept a lower amount to ensure the sale of a player they’re seemingly happy to let go.