Home Europe Liverpool and Manchester City ‘bid’ for player, would ‘never say no’ to...
SHARE

Nabil Fekir came close to joining Liverpool last summer, but Lyon pulled the plug on the transfer because the Reds reportedly tried to lower the transfer fee after the clubs had initially agreed a deal.

The France international continued with his current employer and has one year left on his contract with the Ligue 1 side.

Sport now claims Jurgen Klopp’s club, Manchester City and Chelsea ‘bid’ for the playmaker, while he has also emerged as a target for Real Madrid.

The Catalan newspaper does not provide details about bids made by the Champions League finalists, Pep Guardiola’s side or the Blues and there is no suggestion as to who is leading the race for the World Cup winner’s signature as of now.

It sounds more like they mean ‘bid’ as intention rather than act.

Lyon president Jean-Michel Aulas earlier stated there is an “understanding” to let the player leave in the summer. 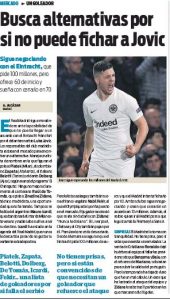 One of the options mentioned in the list is Fekir and it is stated the Ligue 1 star would “never say no” to joining Zinedine Zidane’s side.

Even though Liverpool and City are said to be keen on Fekir, Sport believe he’d choose Madrid.