Speaking to the Catalan press on Tuesday, Barcelona director Eric Abidal has given a few details about Ernesto Valverde’s departure from the club.

He shared the reasons the manager was sacked by the board, and even made some criticism towards players who weren’t giving all they could on the pitch.

“Many players were not satisfied or didn’t work hard and there was also an internal communication issue,” Abidal told Sport.

“The relationship between manager and dressing room has always been good, but there are things that I can smell as a former player. I told the club what I thought and had to make a decision.” 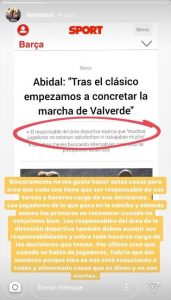 What Abidal didn’t expect was that Barcelona’s biggest legend would soon go public against him. In an Instagram post, Lionel Messi sent the director a message, saying he should name those players, otherwise it would feel like all the squad was guilty for the sacking.

“I honestly don’t like to do these things but I think everyone has to be responsible for their tasks and take care of their decisions.

“The players for what happens on the pitch, and we are also the first to acknowledge when we were not good. Those responsible for the area of sports management must also assume their responsibilities and above all take charge of the decisions they make.

“Finally, I think that when talking about players, we should give names because otherwise we are getting everyone dirty and feeding things that are said and are not true.”

It’s obviously a huge deal for Barcelona to see Lionel Messi clashing with the board, so the quotes are having some huge impact in the Spanish press, and will certainly be on the front page of Wednesday’s newspapers.

Barcelona announced earlier on Tuesday that Ousmane Dembele is facing an extended spell on the sidelines following a hamstring tear.

It was later reported the club will look to sign a replacement, even though the window has closed. Spanish regulations allow them to do so, as long as the injured player is out for a minimum of five months.

Barcelona will now have to give evidence for that length of absence for their player, and then they can move to sign someone to cover, as long as that player is already registered in Spain.

After Messi’s words, it won’t be long before his first comment (‘everyone has to be responsible for their tasks and take care of their decisions’) is seen a dig towards Abidal’s recruitment.