The player gave the outlet an interview to speak mostly about the Champions League clash between Manchester City and Porto today.

Following his experience at Porto and in the Premier League, Ricardo Pereira gave his opinion on what his former side will need to do to get a good result in England.

Now the 27-year-old also had some time to speak about his recovery from a cruciate ligament rupture, which he says is going pretty well.

“It’s on a good level. I’m doing individual work and I already integrate the warm-up with the team, but for now I’m still progressing individually, and then I will gradually move on to collective work,” Ricardo Pereira told O Jogo. 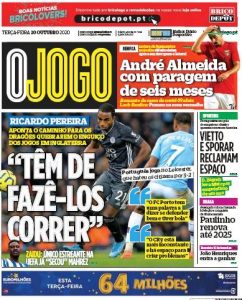 Ricardo Pereira injured his knee back in March, in a Leicester City game. Asked if he already has a date to return, he says: “It’s still a bit early to talk about it. At the start I begin working with the team in two weeks if, from then on, I gain the competitive pace and the necessary confidence. It will depend, but I believe within six weeks. As I’ve never been through any of this, I’m not sure of the deadlines, but I believe it will be around this, if all goes well.”

The Foxes player also gave some details on how the recovery work has been going so far.

“It’s easier now, no doubt. At first it was more complicated, especially post-surgery, because I was in pain, and I was on crutches and needed help with just about everything at home. Add to that the fact that we are in quarantine due to the pandemic. Those were very complicated times, but now it’s a lot easier, especially since I started running and doing ball work. These are always more interesting tasks and we know that we are close to playing and training again. This makes it much easier than when it was just gym work.

“In the first postoperative month I did it in England, then I went to Portugal for a month and a half and then I came back. I still had a reduced vacation and at that time I was doing almost the same work that I had to do in England.”

With the pandemic delaying the Euros for a year, there’s now a chance Ricardo Pereira could be called up by Portugal this time, and he’s hopeful of that.

“Without a doubt [laughs]. In addition, the pandemic came about at the same time as the injury, because the game in which I got injured was the last one before the break, so I was almost three months without missing a game.”