The idea of Islam Slimani returning to Sporting has been rising again in the Portuguese media in recent days. The striker had a wonderful period with the Lisbon club before signing for Leicester City, but failed to replicate that with the Foxes.

He was never likely to find a way past Jamie Vardy, and his career at Leicester has seemed over for some time. Spending this season loan at AS Monaco, Slimani has done relatively well and there’s likely to be interest for him in the summer.

Adrien Silva is also on loan from Leicester to the French principality club, and Saturday’s edition of O Jogo reports both players have ‘demonstrated their desire’ to return to Sporting, where the midfielder was club captain.

That desire is going to have to be huge, because even if agreement can be found with Leicester, the players would have to fit into Sporting’s new wage structure. 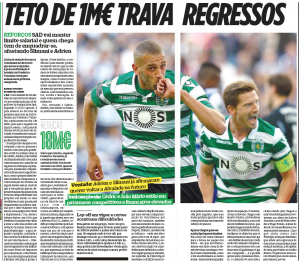 That would mean accepting a salary of no more than €1m a year, after tax. This could test just how much the Leicester pair really want to go back to the club they were both happiest at.