The youth system at Sporting has long been something the club look towards to make money from future transfers. Find a gem, give him a season or two in the first team, and then cash-in.

It hasn’t worked as well as hoped recently, and that’s led to some frustration, but it still doesn’t stop the excitement when the next shiny thing turns up.

Saturday’s edition of Record focuses on 17 year old Joelson, and Arsenal are dragged into the picture.

The Portuguese newspaper explains Sporting want to protect the player with a new contract and a €100m clause. They wouldn’t give him the wages to match such a clause, but will try to get him to agree to it anyway.

Arsenal have ‘joined the list’ of clubs chasing the young attacker’s signature. Borussia Dortmund and RB Leipzig have also been keen, yet it’s now thought the Premier League could be more likely. 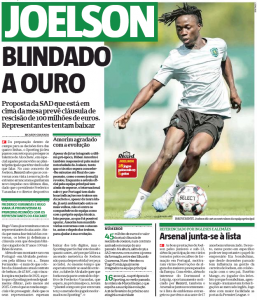 That’s due to the player being assisted by Kia Joorabchian, who it’s stated has a good relationship with English clubs and could therefore ‘open the doors’ to the Premier League.

Even if they do get that €100m clause in place, no club will be paying such a fee, however, there’s no indication of what Sporting would realistically want from Arsenal and others.

Watford and Southampton ‘lurking’ around La Liga defender – Need to...

Club ‘among favourites’ to land Tottenham player this summer – Two...