Last week, there were several reports from the Italian media regarding Leeds United’s pursuit for Torino fullback Ola Aina.

It was claimed the Whites were ‘pressing’ for the signing, with the clubs currently ‘sitting at the table’ to discuss a fee for the 25-year-old.

Now as newspaper Tuttosport features a short piece on the player today, they also make it clear that it’s not only Leeds who are interested in the move.

With Torino making new signings, they’ll also feel forced to let some of their players go in January, so it’s said Aina is now ‘destined’ to leave the club. 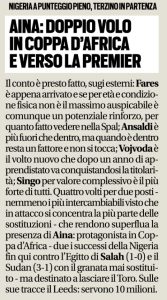 Despite two wins in Nigeria’s two starts in the Africa Cup of Nations, the fullback may not find a place for him at Torino once he returns to Italy, and that’s why he’s now said to be going ‘towards’ the Premier League.

However, there’s not a lot of information on the talks with Leeds United this time.

Tuttosport now only writes that the Whites are on his ‘trail’, and Torino continue to demand €10m for the transfer.