Brighton & Hove Albion and Leeds United are both interested in Venezuelan defender Jhon Chancellor, according to claims from Italy today.

Newspaper Tuttosport writes that Brescia could cash in with the player’s departure this summer, since both Premier Leagues side are following him.

It’s claimed the Serie B side could make between €4m and €5m with the sale, and that would mean a lot for their budget.

However, there are no details on talks or bids made by either Brighton or Leeds so far, so it seems their interest is still in the early stages. 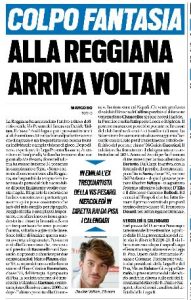 It’s been only a year since Brescia signed Chancellor in a €1.5m move from Qatari side Al Ahli. He made 27 appearances for the Italian side, and that was apparently enough to draw the attention from Brighton and Leeds.

He has 17 appearances for Venezuela, and since he doesn’t seem to have an EU passport, perhaps his time with the national team could help him get a work permit for the Premier League.