However, the Premier League is all about strength in depth, meaning that if the Whites can bring in some extra reinforcements for Jesse Marsch this summer, they should in order to avoid a repeat of the recently finished season.

Leeds escaped relegation back to the Championship at the very last minute, and everything indicates the club want to make sure that doesn’t happen again during the next campaign.

One man who could help do that is Ola Aina, a player to which the Elland Road side have been linked in the past, but if Gazzetta dello Sport on Thursday are to be believed, they have taken the first step to try and secure a transfer. 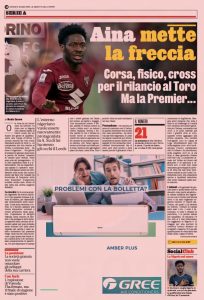 They state Leeds ‘was able to move first, launching the usual signals through international intermediaries in the last few hours’.

They aren’t the only ones interested, though, as ‘other clubs are ready to come forward because the player is well known in England’, having been born in England and come through Chelsea’s youth teams.

As far as Torino, where the player currently is contracted, their position ‘on the player’s future is open to serious discussions, as they ‘don’t want to hinder Aina’s career developments’ but don’t want to ‘sell him at all costs’.

Basically, it’s a situation ‘open to any solution’, with the right-back still having a year on his deal in Turin, meaning that if he doesn’t move anywhere this summer, he might leave on a free next year.