The FA Women’s Super League got off to a good start over the weekend, with some great goals and impressive attendances.

Manchester City facing Manchester United for the first time in the WSL got the most coverage, and the attendance for the match, which had been moved to the Etihad, was more than 30,000.

As expected, the home side won, but it was a close game and that gives a lot of credit to Casey Stoney and her team, giving they’ve only been in existence for just over a year.

Quick promotion to the top flight enabled Manchester United to attract additional players over the summer, and one of the signings was Jackie Groenen.

Dutch newspaper De Telegraaf have an interview with the midfielder in their Monday edition, and say it was a ‘dream move’ for the 24 year old.

It came after a good World Cup for the Netherlands, finishing second behind the mighty US team, and Groenen’s career is on the up.

Looking back at the match, she’s certainly taking the positives: “We certainly played well in the first half. The only thing missing was a goal. In the second half we came under pressure. Although we still had chances for the 1-1.”

Groenen almost levelled the score herself, being denied by the woodwork: “That’s right. After a run of mine towards the penalty area of ​​City, a defender tried to kick the ball away. The ball then hit the post through my feet. That was a pity. But all in all I had a good feeling about the competition. It was the first game of United at the highest level and against City, who came second last year, we were certainly not the easiest opponent.”

Given the level she showed with the Dutch national team, De Telegraaf put it to Groenen that she arrived as a big signing, with much expected: “I do intend to take the team in tow, yes. That is partly why I was signed. But as soon as you perform, it will come naturally. We have a young, talented group and I also have a lot of confidence in trainer Casey Stoney. I believe that I can further develop as a football star with her.” 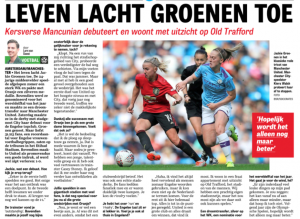 Having played at the Etihad and seen what she described as a true ‘rivalry’ between the supporters, Groenen is now hoping for the chance to do her stuff at the Theatre of Dreams: “I live in a nice apartment with a view of Old Trafford, the men’s stadium. We have a beautiful stadium we play at, but it would be great if we could ever play there.”

Surely that day can’t be too far away.