One of the biggest stories towards the end of the summer transfer window, Alexis Sánchez’s loan deal to Inter eventually went through, as the Chilean reunited with his former Manchester United teammate Romelu Lukaku.

While the Belgian has already scored two goals in his first two games, the former Arsenal man has yet to feature for the Italians, but is expected to do so after the international break.

Coincidentally, his first appearance for Inter could be against Udinese, where he first made a name for himself in Europe prior to his big move to Barcelona.

Now done with international duty, the forward is expected to return to Milan this week, where he will fully settle in and move into a villa near Lake Como, one with a garden for his dogs, according to Corriere dello Sport.

The Italian newspaper explain Sánchez is ‘hoping to extend his adventure with Inter’, and is already ‘dreaming of being bought and to stay for the 2020-21 season’. 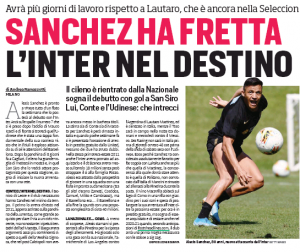 Before that happens, however, he will need to convince Inter he is still worth spending a chunk of money on, and will be given enough chances to do so as he’s widely seen as the favourite to play alongside (or behind) Lukaku.

It seems Sánchez finally has something in common with most Manchester United fans: they also will want him to stay in Italy beyond this season.