Home Europe From Italy: Inter Milan may pull out of move for Tottenham’s Christian...
SHARE

Christian Eriksen has been linked with a move to Inter Milan for several months, with the stories getting stronger in recent weeks.

For a while the slant in Italy was that Inter are looking at a summer move for the player, and wouldn’t be so interested in having to pay a fee to Tottenham in the January window.

That changed over the past week, and then there were claims from Denmark (which still seemed to be from Italian sources) stating a move was pretty much done.

Sunday’s edition of Corriere della Sera walks back on that several steps, and even states Inter could pull out of the move, for the January window at least.

Their manager Antonio Conte is incredibly demanding when it comes to the transfer market, and he’s said to want someone experienced in Serie A, a player who can make a difference to his team immediately, without needing a period of time to settle in. 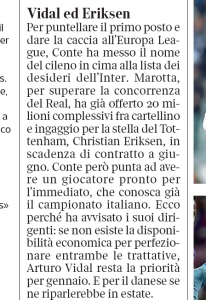 Barcelona’s Arturo Vidal has been the player chosen, and Conte is reported to have told those in charge at Inter that if there’s no financial capability to complete both deals he’d take the Chilean before the Dane.

Inter would then try and return for Eriksen when his Tottenham contract expires in the summer.