Beppe Marotta has announced he’ll be leaving Juventus after a hugely successful period as the club’s CEO and general manager.

That has led to an explosion of Juventus related rumours in the Italian sport media. Will Fabio Paratici replace him, or will the sporting director leave the club? Who else could come in? What will Pavel Nedved do?

Manchester United’s current situation has seen them dragged in. Paratici has had success as a scout and sporting director, at the very highest level, identifying good market opportunities for Juventus over a number of years. That link has already been made.

They’re working on the idea, a rumour which they say is growing, of Manchester United going for the double act of Beppe Marotta and Antonio Conte, with both men being available.

Marotta and Conte enjoyed success together at Juventus, although it must be said they did have transfer run-ins and, according to the Italian media, the former Chelsea manager didn’t feel backed enough at times. 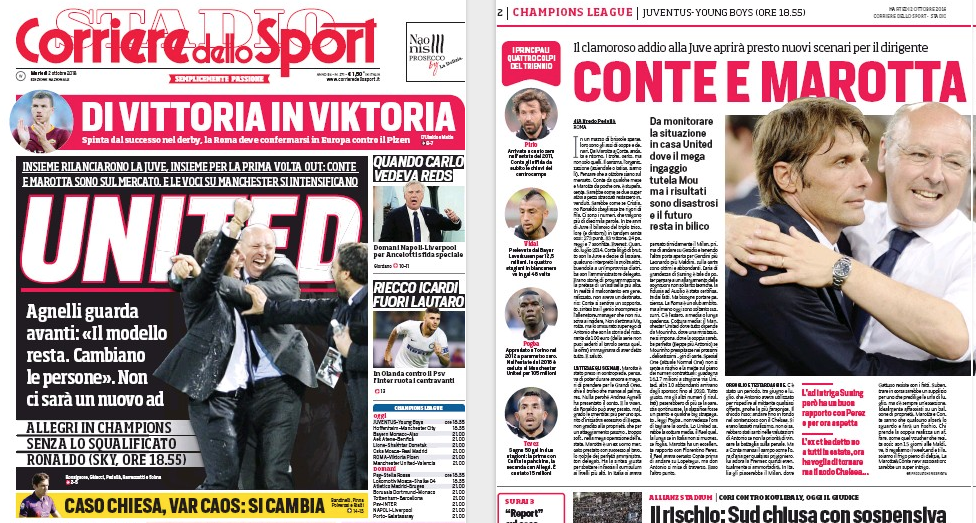 The outline idea would be for Conte to replace Jose Mourinho and then for Marotta to get a role at the club too. Quite how that would work with Ed Woodward is unclear, but Marotta is far more a ‘football man’ than the current Manchester United chief.

Going with the idea of this double act, Woodward would surely then have to take a role which was solely business.

It’s a long shot, but Corriere dello Sport certainly seem excited. And Conte may relish the chance of succeeding where Mourinho has failed, especially after their public spats.