In the past 24 hours, there’s been a mix of reports regarding the future of Benfica winger Chris Willock.

It was first the English press who claimed Huddersfield Town found a deal to keep the player on a permanent deal, following the loan spell he had with them last season.

Part of the Portuguese media has been buying this story, and only repeating what’s being said in England, but newspaper O Jogo writes there’s been a problem regarding the personal terms.

The outlet writes the negotiation between Willock and the Terriers has ‘failed’ as there’s ‘no agreement’. That’s all they have to say in a very short paragraph. 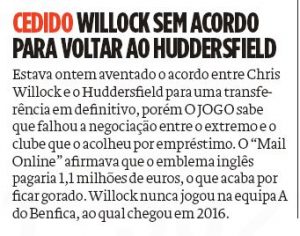 O Jogo even mentions the Daily Mail to say Huddersfield Town would be paying €1.1m for the move, yet they make it clear their own sources say there’s an issue over wages.

Chris Willock joined the Terriers in January and stayed until June. He scored two goals in 16 appearances for the club.