Manchester City’s Bernardo Silva ‘has a proposal’ from Atlético Madrid, but he would ‘opt’ for a move to Barcelona, according to Mundo Deportivo.

Barcelona like the 26-year-old’s profile and feel he could ‘fit’ into their midfield. The player would also give his approval to make a switch to the Camp Nou.

It’s claimed the Portugal international held talks with Pep Guardiola at the end of last season.

Mundo don’t have the details of the conversation between the two, but they state Silva hasn’t complained ‘about any sporting issue’. However, he believes his ‘time has come’ to leave the Premier League winners.

Guardiola considers him a ‘disciplined and a class player’, and ‘understands his concerns’ of wanting a move elsewhere. Mundo suggest Silva’s ‘departure from Manchester would go through La Liga’.

Diego Simeone’s side have already positioned themselves for the former Benfica man, but their proposal would ‘coincide’ with Barca’s interest. He’s leaning towards the Catalan club and it would be a ‘dream’ for Silva to wear the Barcelona shirt. 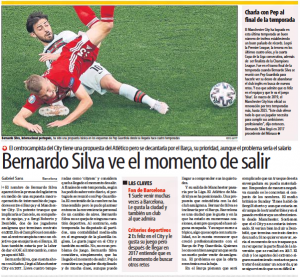 The Blaugrana are aware it’s difficult to undertake an operation of this magnitude as their economic situation has become a ‘problem’.

Silva is looking for a new challenge and believes his time has come to an end at the Etihad.