With another win under their belts over the weekend, Glasgow Rangers now turn their attention back to the Europa League.

Steven Gerrard’s side sit joint top of Group D after a win over Standard Liege last week and will be looking to add to that when Lech Poznań travel to Ibrox this evening.

Rangers are very much favourites for the clash, even more so after an impressive start to the season, and have duly received plenty of praise in Poland ahead of the game.

Przeglad Sportowy kick off the coverage, with their predicted lineup seeing Rangers go with Alfredo Morelos leading the line as opposed to the hero from Liege, Kemar Roofe.

They explain that Lech’s lineup will be without several first-team stars as none of Tiba, Jakub Kaminski and Djordje Crnomarkovic have made the trip to Ibrox, a ‘significant weakening’ as far as they’re concerned.

Tiba is the significant miss, with him described as Lech’s best player following his three goals and six assists in 12 games this season.

There’s little comment on Rangers from the newspaper, but Wyborcza provide that, saying Gerrard has created a ‘winning machine’ at Ibrox and that Lech Poznan should be a ‘snack’ for them in the game.

Indeed, they believe that the Polish side will have to ‘climb another Himalayan peak’ after taking on Benfica in matchday one. 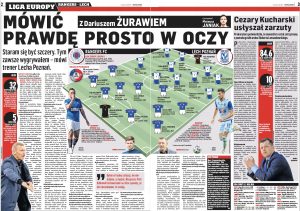 That sentiment is shared by Tygodnik Ostrolęcki, who simply say that Lech are facing a ‘difficult trip to Scotland’.

Poznan boss Dariusz Żuraw was also full of praise for Rangers before the game, although a little less pessimistic than his country’s newspapers.

“We deal with what we have, and it seems to me that it does not look bad,” Meczyki report him saying.

“Rangers play a bit differently than Benfica, because they are disciplined in defence, which means they concede very few goals and there is no such thing in this case.

“Therefore, even more so if we manage to create good situations at their goal tomorrow, we must be very focused and use them.

“In attack, the Rangers players are creative, they can quickly counterattack after an interception, so we also need to be very focused in our defensive game.

“Above all, we want to play a good match, but I don’t know if we will manage to create such a spectacle as against Benfica.”