Many times when opening Portuguese newspapers this season, we’ve seen Reading striker Lucas João being highlighted by the local media.

With eight goals in eight appearances so far, the player has been crucial in the campaign which is keeping the Royals on top of the Championship table.

Today it’s newspaper Record who feature a story on Lucas João, and they manage to take a few words from the 27-year-old.

“One of my goals since I came to England is to play in the Premier League and I think about it”, Lucas João told Record.

“I want to fulfil the dream of playing in the Premier League. But the Championship is a complicated league. Last season, the club was worse on the table, this season has been different and we have done a good job.”

On the start of season Reading have been having, Lucas João credited it to the new manager: “It was an excellent start, the result of the work we do every day. It also has a lot to do with the mentality that the new coach has implemented”. 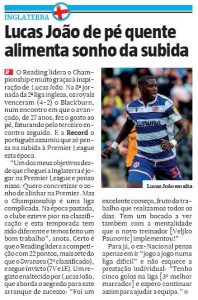 Without making any big promises for the season, Lucas João claimed he’s only focused on “game by game in a difficult league”, and also talked about his goalscoring record so far.

“I have five goals in the league and I hope to stay that way to help the team.”

Lucas João was signed on a £5m deal from Sheffield Wednesday in the summer of 2019. He only scored seven goals in his first season for Reading, and in a few months into this season, he’s been showing he can do a lot more for the club.