Over the past few days, reports in England and Spain have stated Manchester City manager Pep Guardiola has offered a few of his players to Barcelona.

Mundo Deportivo state City’s Aymeric Laporte, João Cancelo, Bernardo Silva and Riyad Mahrez are ‘the four options’ and the ‘options are in this order’ for the La Liga side.

It’s not that the Citizens ‘want to do without’ these players, but if there were to receive a good proposal for them, they will study it.

The newspaper also relays claims made by TV3 journalist Oriol Domènech, where he stressed Laporte and Cancelo seduce Ronald Koeman’s side the most.

Ousmane Dembélé has a year left on his contract at the Camp Nou and hasn’t signed an extension so far.

If Barca end up selling Dembélé, they would then be interested in Silva and Mahrez, with the Portugal international being the first option ahead of the Algerian. 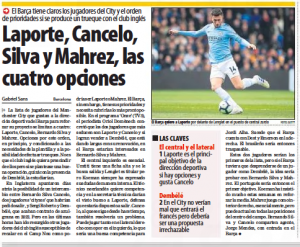 Mundo also add that should Cancelo end up at the Camp Nou, the Blaugrana will then make Emerson available in the market.

Even though Barcelona have four Manchester City men on their agenda, they would prefer to sign one or more of them in an exchange deal, mainly due to their financial situation.