Everton and Tottenham ‘sent offers’ to sign Kurt Zouma from Chelsea this summer, but saw their efforts rejected by the Blues.

That’s according to L’Equipe, who cover the player’s situation with France following his impressive displays for Chelsea.

The French centre back has established himself as the first choice alongside Thiago Silva at the beginning of this season and, a couple of blips aside, has earned rave reviews.

His displays have seen him return to the France setup for this international break and L’Equipe explain that the player knows this could be his last chance to impress, with a new generation waiting in the wings to replace him.

He needs to leave his mark, ‘as he has been doing in his club for the past few months’ where he has ‘won over’ Frank Lampard.

Things, though, could have been very different. The newspaper reveals that both Tottenham and Everton ‘sent offers’ for Zouma this summer and he would not have ‘looked unfavourably’ on ‘starting a new cycle’ at either club.

However, these approaches were rejected by Chelsea, who made it clear they wanted ‘nearly €45m’ if they were to sanction a sale. 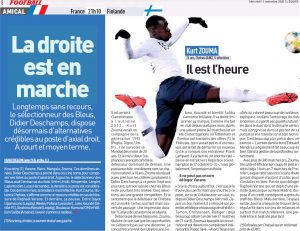 That presumably never happened given he ended up staying, and it’s ended up working in everyone’s favour, with Zouma establishing himself with Chelsea instead.

It’s not surprising to see both of these clubs linked, though.

Everton remain admirers after Zouma’s loan spell there under Marco Silva, and Mourinho actually signed Zouma for Chelsea back in 2014.

There’s an established relationship with both clubs, but given they got the centre backs they needed from the Championship instead – in Ben Godfrey and Joe Rodon – it would be surprising to see this rumour come back again.