Real Madrid are now fourth in the league table, six points behind leaders Real Sociedad, and Zinedine Zidane has been criticised for his project at the club after Los Blancos’ 4-1 defeat to Valencia before the international break.

AS states the players who were key in the last few years are now above 30. The report is also critical of the manager’s decision to let go of some others, who could have had an important role at the Santiago Bernabéu this season.

Arsenal midfielder Dani Ceballos is among them and the newspaper suggests the midfielder is one of the players of the ‘future Madrid that was lost’.

The 24-year-old joined the Gunners on loan from Real Madrid last season. He managed to impress Mikel Arteta in the second half of the last campaign, which convinced the north London club’s manager to sign him again on a temporary deal in the summer.

Ceballos joined Real Madrid from Real Betis in 2017 and after one season, Zidane stepped down, only to return to the club in March 2019.

The Spain international was critical about Zidane during an interview with Radio Marca in September 2018.

He said: “He told me to value the players ahead of me. There was a time of the season that Kroos and Modric were injured and he changed the system to put other players in. That burns you a little and it hurts.”

Ceballos’ comments on Zidane are relayed by AS today and the newspaper further adds the player will find it ‘very difficult’ to return to Real Madrid, as long as the 48-year-old is managing the club. 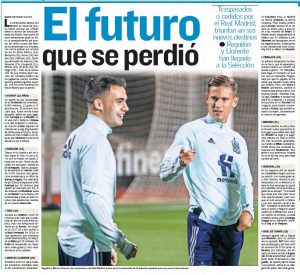 The former Betis man has made 11 appearances in all competitions for Arsenal this season and is now enjoying life under Arteta at the Emirates.

AS’s report gives an indication that Ceballos could have had a role to play at Real Madrid, if Zidane had decided to retain the player.