Argentine newspaper El Dia today has an article explaining the situation of several players who are arriving and leaving Boca Juniors.

One of these guys is Wilmar Barrios, who’s recently been linked with an Everton move and has his future a little bit unclear.

El Dia doesn’t really have a lot to say about the Toffees’ efforts to get the player, although they do mention their interest.

They say if clubs don’t pay what he’s worth, Barrios is staying where he is, as Boca Juniors are not in a hurry to sell. 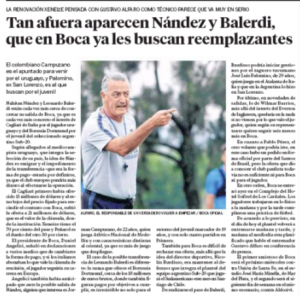 El Dia also mentions that according to Barrios’ agent, he wants to stay at Boca Juniors for six months more.

Gol Caracol recently claimed that Everton are the ‘latest’ club chasing the player, quoting the Boca president Daniel Angelici, who was speaking to Argentine radio, as saying: “No offer has come for Barrios, he has a clause of €23m and is non-transferable, if a club puts the money in, they will have to talk to the player, but if he wants to go there’s nothing we can do.”

There’s lots of mixed messages being sent and the gist seems to be that as long as nobody turns up with the €23m, Boca and their player want fans to think there was no consideration of a transfer anyway.