A column in today’s HLN covered the situation with Tottenham and Moussa Dembele and explained the club are agreeing to a China move because they don’t want to stand in the player’s way.

It’s explained Spurs have agreed to an offer worth €12m from Beijing Guoan FC and aren’t even making an effort to deny the claims. The only step now if for the player to give everything the go-ahead.

The contract would be for a period of three years, taking Dembele to the age of 35, and he’d treble his current Tottenham wages, ending up on €10m a year.

The move is described as win-win, with Spurs pleased with the money for someone who can leave for free at the end of June.

Thanks to the player’s ‘loyal’ service, Tottenham ‘don’t want to be difficult’ and that may 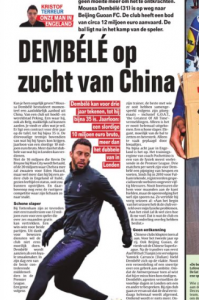 be why they’re not pushing for more money. Whilst €12m sounds reasonable, it’s not such an impressive fee for a Chinese club signing a player of Dembele’s calibre.

Such a transfer has ‘blessing’ from the Premier League club, and it’s over to Dembele now.

Interestingly, HLN’s Kristof Terreur, who wrote the initial story, today tweeted a denial from the Chinese club over contact with the midfielder, although he insists there’s an offer on the table.