If there’s one thing Everton need to do in this summer transfer window, it’s find themselves a striker or two.

The Blues are yet to really replace Romelu Lukaku and while Dominic Calvert-Lewin has potential and Richarlison is a useful option up front, neither are the goalscoring forward a team wanting to break into the top six needs.

So far, though, there hasn’t been much movement from Everton on that front. They’re interested in Moise Kean but beyond that, the rumour mill has been slow.

La Voix du Nord change that and say the Blues are keen on Lille striker Rafael Leão and that they’ve already approached the Ligue 1 side to make their interest known.

According to the newspaper, Everton and four other clubs have ‘approached Lille’ with ‘an offer close to €40m’ although none of those are concrete bids.

However, should one become a firm offer, Lille president Gerard Lopez would be a willing seller. He ‘won’t let this slip through his fingers’ because not only does it represent a huge profit for the club, he feels such an offer won’t be arriving again. 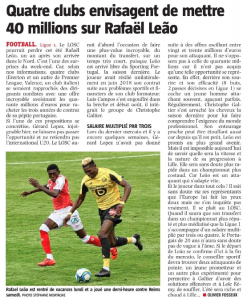 Leão is also likely to be happy to move given he could see his wages triple or quadruple, particularly if he joins Everton.

And it’s a move that makes a lot of sense for the Toffees. They need a striker and Leão certainly has the attributes to be a hit in the Premier League.

He also fits into the model that Marcel Brands prefers, namely young talent that can be developed and potentially sold on at a much higher price in future. €40m is not a lot in today’s market either and they showed their willingness to pay for top talent with Richarlison last season.

With other clubs interested, though, they may have to move fast in this instance or risk losing out.