Manchester City and Chelsea wanted to sign the striker this summer, but BVB’s refusal to let him leave has forced them to shift their focus to Harry Kane and Romelu Lukaku respectively.

Real Madrid’s plan was to sign Kylian Mbappé now and make an attempt for Haaland next year.

AS on Thursday explain the La Liga side would ‘prefer to avoid risks’ and go after the Norway international this summer, if they find it ‘impossible’ to land the PSG star.

Los Blancos are aware they will be joined by the Red Devils and a handful of clubs to land Haaland in the summer of 2022. It’s said that ‘even Man United can fight’ for Ole Gunnar Solskjaer’s former player.

Real Madrid would want to ‘avoid those complications’ [competition from United and others] and want to take advantage of their good relationship with Dortmund’s leaders to get the deal over the line for Haaland in the ongoing window.

AS are of the belief Hans-Joachim Watzke ‘would only open his hand this summer with Real Madrid’, but the Spanish giants will have to pay the ‘price of gold’.

Although Carlo Ancelotti’s side have already raised funds, they could sell Martin Ødegaard or Luka Jović to improve their finances to sign Haaland, ‘without compromising the future arrival of Mbappé’. 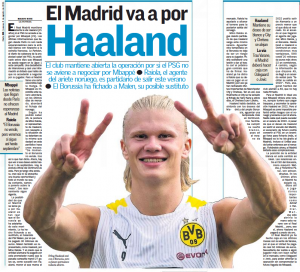 The possibility of Real Madrid going after the BVB star is ‘so real’ they have already signed Donyell Malen to strengthen their attacking division. It looks like AS have deliberately left out the fact that Dortmund signed the Dutchman to replace Jadon Sancho.

Irrespective of this, the newspaper points out Haaland’s advisor Mino Raiola is ‘still a supporter’ of him leaving the club in the ongoing window. Even if BVB give the green signal to sell their prized asset, Real Madrid must spend big to secure his signing.