Except for a few departures as contracts expired and Romelu Lukaku returning to Inter on loan, Chelsea’s transfer window has yet to really start.

Thomas Tuchel has a lot of work to do if he wants to catch up with Manchester City and Liverpool, which Todd Boehly also knows.

As well as a couple of defenders (at least), Chelsea are also on the lookout for a midfielder, with Adrien Rabiot a cheaper option.

The Frenchman is a player Tuchel knows well from their time together in Paris, and it appears he has highlighted him as a potential option to strengthen his Stamford Bridge squad.

This has been suggested in the past, and continues to be pushed by Corriere dello Sport on Friday.

They claim the player ‘has asked to leave’, and out of all the clubs who like him, there’s ‘especially Chelsea’. 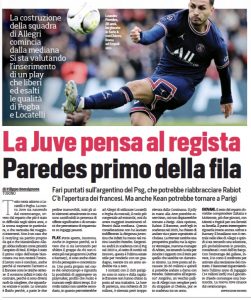 The Premier League ‘would be a welcome prospect’ for the player, but there’s still a tiny bit of hope Paris Saint-Germain could come knocking for a return, now that there has been a change of leadership.

The belief is that Juventus ‘aim to collect €20-30m’ from any Rabiot sale, which could allow them to go after Leandro Paredes.

However, if the Argentine were to stay in Paris, the alternative would be Jorginho, ‘an old Max Allegri obsession’, although any discussion wouldn’t be easy, regardless of the fact his contract at Chelsea expires next June.