On Monday, we relayed the latest news from Italy regarding Napoli and their interest in Bournemouth’s Nathan Aké.

It was made clear the Cherries’ star wasn’t top of the Italian club’s list, with that award going to Kostas Manolas, currently at AS Roma, but the Dutchman was one of the backup plans should things not go well with the Greece international.

Aké himself was said to be very excited about a potential move to the south of Italy, loving the region and Naples itself, which would certainly helps the Serie A side, saving them the effort of convincing him to move.

Gazzetta dello Sport provide an update on the situation 24 hours later, explaining the price is the main stumbling block ahead of any potential deal, as Bournemouth’s €40m request is deemed too excessive. 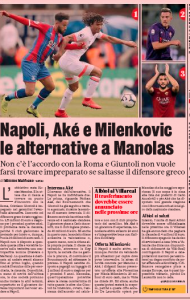 With this in mind, Cristiano Giuntoli, Napoli’s director of football, is reportedly trying to lower Eddie Howe and co.’s demands through Key Sports, the agency representing Aké.

The Italian side would be prepared to pay him €2m/year for the next five years.

Even if the Bournemouth player does accept the contract, it won’t matter until Napoli find an agreement with the Premier League club.