Former Aston Villa goalkeeper Pierluigi Gollini has told the Italian media playing in the Championship was difficult as it wasn’t a tactically strong league.

Gollini recently left Aston Villa to sign for Atalanta when he pushed out of the team by Steve Bruce.

Speaking to Gazzetta dello Sport, Gollini was asked about his time at Aston Villa: “In the Championship you play with great intensity, there are no tactics, it is different from the Premier League, which has changed so much thanks to the Italian coaches. Every game is a battle and the goalkeeper is always under pressure.”

Asked about Roberto De Matteo being dismissed just months into the job Gollini said: “Unfortunately he was sacked, they didn’t give him time to work. I didn’t feel good with the new English coach and with his companions.

“On arrival, I was greeted coldly, while at the Atalanta everything was different. I played a lot with Aston Villa, but I wanted to go back to Italy.” 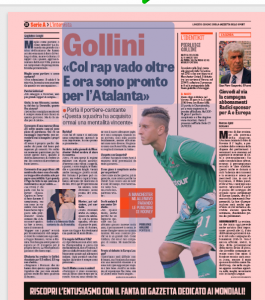 Gollini signed for Aston Villa in 2016 from Hellas Verona and under De Matteo he was the club’s first choice keeper. However, when Bruce replaced the former Chelsea man, Gollini saw himself out of the team.

Just months after Bruce’s arrival the Italian goalkeeper was loaned out to Serie A side Atalanta on a 18 month loan, with a right of redemption.

The former Italy U21 international did enough to convince Atalanta and earlier this month he signed for the Italian club on a permanent deal for €3.5m.