Tuttosport rock from being very confident on behalf of Juventus signing Emre Can from Liverpool to being quite pessimistic and talking up the prospect of the midfielder going somewhere else.

With a Liverpool contract expiring at the end of June, Can has very much played the game of the market over the past few months.

The player and his representatives seem to have realised that Can’s free agent status will not only bring him a big signing on fee and wages, but also interest from other clubs who probably wouldn’t have considered paying Liverpool a big fee for the player.

In a Monday article, Tuttosport say ‘the countdown starts’ and ‘the clock is ticking’, with Juventus putting pressure on for a quick deal and having some confidence they’ll get it. 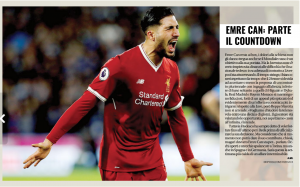 But they’re not the only confident club, according to the Italian claims, with Real Madrid and Bayern Munich also optimistic. The latter are said to have offered a better financial package to Can than Juventus have been prepared to.

There’s widespread confidence, albeit conflicting, but once again there’s no mention of a Liverpool stay having any chance.