Milan, having recently lost Alessio Romagnoli, are in desperate need of a centre-back, and their most likely hunting ground will be Stamford Bridge.

We’ve already covered the story that linked the Serie A side to Chelsea’s Gary Cahill on Monday, and now, although it’s not a particularly new story in itself, Gazzetta dello Sport have added Andreas Christensen in the mix.

The Italian newspaper state any deal for either of the pair would be a loan, but they have a preference.

As you might have guessed, the 22-year-old is being preferred to the veteran 33-year-old, as, even though he’s still young, he possesses a good amount of experience for a defender his age. 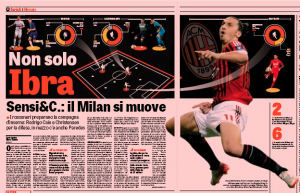 Barely used by Maurizio Sarri this season, the Denmark international was a regular under Antonio Conte last year, making 27 appearances in the league and totalling 40 in all competitions.

Before anything happens, however, Milan are said to need to sit down and look at their finances, as they know getting Cahill or Christensen from Chelsea won’t be cheap, at least wage wise.

Combined, the duo have played just 970 minutes of football for the Blues this season, with most appearances coming in the Europa League.