Home Premier League Tottenham player offered to another club for January transfer, now down to...
SHARE

Takvim report Galatasaray could replace Garry Rodrigues by signing Tottenham Hotspur forward Georges Kevin N’Koudou, who has been offered to them.

The Turkish club have sold Garry Rodrigues to Al Ittihad for a fee believed to be in the region of €11m and Takvim claim they are now looking to sign the out of favour Tottenham man.

N’Koudou has failed to replicate the form he showed in Ligue 1 and the Tottenham player also struggled after joining Burnley on loan in the last winter transfer window. He’s not in the plans of Mauricio Pochettino and will need to find a new parent club.

In the summer the player was linked with a move to Fenerbahce and now their local rivals Galatasaray could sign him. 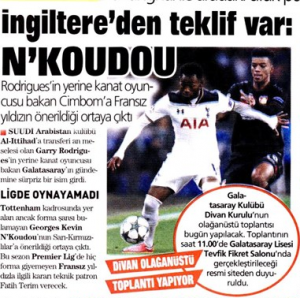 The Turkish newspaper reports Galatasaray manager Fatih Terim will have the final say on this potential transfer.

N’Koudou is under contract at Tottenham until June 2021.