Kristoffer Ajer potentially leaving Celtic for AC Milan continues to be a big story in the Italian sport media.

Sunday’s edition of Corriere dello Sport reports getting Nikola Milenković from Fiorentina is an increasingly difficult task, with the Tuscany club wanting cash ‘and a lot of it’.

Therefore, Milan’s attention is partly turning towards the Celtic option. Corriere call the defender a ‘colossus’ and explain to their readers he’s so good with his feet that he played in midfield earlier in his career.

Claims on Saturday said Celtic could accept an offer in the region of €15m, and today it’s put at a more realistic figure of €20m, with it being made clear the Serie A club know the deal won’t be cheap. 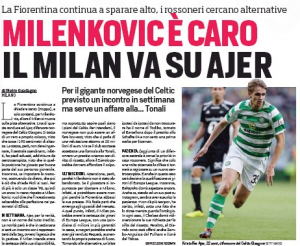 Sandro Tonali, which would see an initial loan and then a permanent transfer. Celtic would obviously be looking for something more conclusive if they’re to part with Ajer.

Corriere say Milan will soon hold a meeting with the agency which represents Ajer, wanting to find out the ‘certainty of his availability’ and also what Celtic’s intentions are.