Home Europe Club have plan if Wolverhampton return for player in January after very...
SHARE

One of the big stories in Italy towards the end of the Premier League transfer window (back in early August) was Wolverhampton Wanderers’ apparent interest in Franck Kessié.

It went down to the wire, too, with reports still doing the rounds of an offer from Molineux being made on deadline day.

However, the Ivorian ended up staying in Italy under Marco Giampaolo (because he ‘wasn’t convinced’ by Wolves), who lasted a whole seven games before getting sacked and replaced by Stefano Pioli.

While there is no apparent outright desire to sell Kessié in January, the midfielder remains one of their more bankable assets, and should an adequate offer land on their desk, it could get considered.

Gazzetta dello Sport on Monday believe Wolves could return for the Milan player in January, and if negotiations do reopen, Mohamed Elneny is the man they could turn to to fill the gap. 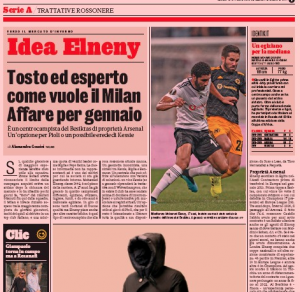 At only €15m or so, the Egyptian’s purchase and Kessié’s sale (which would likely be more than that) could see the Serie A side make a profit without losing too much quality in the centre of the pitch.

It’s just an idea for now, and there’s no outright guarantee Wolverhampton will place a bid for the 22-year-old, but it’s certainly something you can expect being talked about in the coming weeks, or even months, as Pioli’s arrival in the dugout could see a few changes being made.