Barcelona could target Chelsea midfielder Willian next summer, having long held an interest in the Brazilian.

The Catalans were keen on Willian ten years ago, with Pep Guardiola wanting to sign the player after coming up against him in the Champions League.

Barcelona elected to sign others, though, with Willian moving to Anzhi and then onto the Premier League instead.

Barça’s interest has not died down since then, and he was a target again this summer, with various reports in England stating that the bidding went as high as €60m.

Now Mundo Deportivo claim that they could revive that interest next summer, with Willian set to be a free agent.

Knowing that the midfielder could be available on a free with his Chelsea contract expiring, Barcelona are keeping track of the situation.

It’s claimed Willian is refusing to sign a new deal at Stamford Bridge, and Barcelona could initiate contact as early as January to line up a move.

There are some things working against a potential move, though. Barça are determined to ‘renew their workforce’ and are targeting younger players for the future. 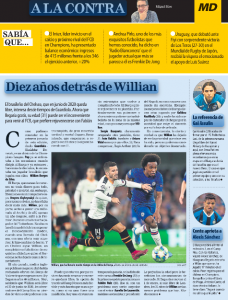 That strategy has already seen them sign Arthur and Frenkie de Jong and they’ve got their eye on Napoli midfielder Fabian Ruiz as well. Therefore, at 31-year-old Willian is not a priority.

However, signing Ruiz is likely to be a difficult task with Mundo explaining that dealing with Napoli owner Aurelio De Laurentiis is ‘like pulling a tooth without anaesthesia’.

That could lead to Barcelona looking at Willian as an alternative as, while he is older than they would like, he will be far easier to get with his Chelsea contract expiring.