Searching for a new midfielder this summer, Bologna have highlighted a few names around Europe for the role, and their attention has partly turned towards England.

Top of the list is Roma’s Gerson, who spent last season on loan at Fiorentina, but if that doesn’t happen, Gazzetta dello Sport state the Serie A side could turn to either West Ham’s Pedro Obiang or Stoke City’s Giannelli Imbula, following both ‘with attention’.

The Hammers’ midfielder has been linked to half the Italian league already this summer (slight over exaggeration, but still close), yet nothing concrete has taken place as of yet.

As for Imbula, the former Marseille starlet spent time on loan at Rayo Vallecano in Spain last season without ever setting the league alight (they got relegated, dead last), meaning the Potters, who don’t appear to have huge plans for the 26-year-old going forward, will need to find him a new team. 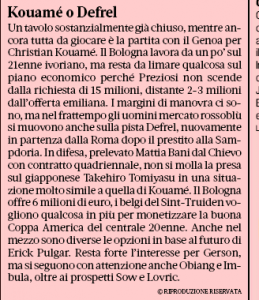 Still contracted to bet365 Stadium until 2021, Imbula made 22 appearances in La Liga last year, playing quite regularly up until the end of March, at which point a hand injury kept him on the sidelines for the remainder of the campaign (two bench appearances against Real Madrid and Levante aside).

Both would require semi-important investments to prise from their respective clubs, and it remains to be seen if Bologna, who also want Christian Kouamé (€15m), will have the required funds to get either on top of the striker.