Andre Gomes to Everton is the transfer deal that just won’t get over the line. The Portuguese midfielder has been close to joining the Blues permanently for much of this month.

As far as most are concerned, Everton and Barcelona have agreed to a deal. The player also wants to return to Goodison Park, where he spent last season on loan.

So, if there are no problems for Everton, no problems for Barcelona and no issues for Gomes, what’s the hold-up? Surely this is a deal that should have been rubber stamped by now.

Well, last week we reported, courtesy of Mundo Deportivo, that it was a ‘bureaucratic procedure’ holding the whole thing up.

They didn’t specify what that was, and it seemed a little strange. Usually, it’s a term referring to work permits or international clearance, but Gomes doesn’t need either of those.

Anyway, the newspaper was confident the move would go through, and Barcelona were pushing for it to happen before the end of their financial year on June 30th.

Mundo Deportivo have today provided a small update on the move and reasserted that it’s happening. The newspaper has put a timeline together for Barcelona this summer and June 24th (today) has them completing Gomes’ exit. 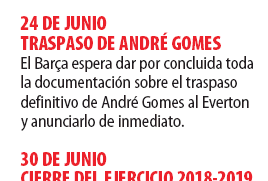 According to the newspaper, Barcelona ‘expects’ to finalise the necessary paperwork and to announce the move ‘immediately’.

That will be music to the ears of Everton, who’ve been desperate to push the move through for months. Whether it’s actually concluded today, however, remains to be seen.