Nemanja Matić hasn’t started in the Premier League for more than a month for Manchester United and his last outing on the pitch for the club was against AZ Alkmaar in the first week of October.

The midfielder’s current deal at Old Trafford expires after this campaign, but the Red Devils have an option to further extend it by a year.

Inter Milan have been credited with an interest in the Serbian and a move to the San Siro would see the 31-year-old reunite with Antonio Conte, who managed him when the two were at Chelsea.

On October 24th, we carried a report from Calciomercato.it, who explained the United player is a ‘favourite’ target for the Serie A side in the winter market, despite the former Blues manager preferring Barcelona’s Arturo Vidal to strengthen his side’s midfield. 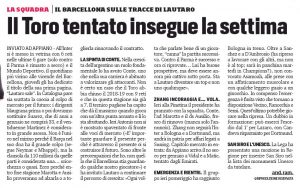 In regards to the incoming players, the Italian newspaper explains Inter have now said no to signing either Vidal or Matić.