When it comes to the 2020 January transfer window, few players will get as much attention as Christian Eriksen.

The Tottenham midfielder’s contract will be six months away from expiring, allowing him to talk with clubs around the world about a potential free transfer in the summer.

Of course, some might not want to wait that long, and there have been multiple reports claiming Manchester United could make a move in January to avoid any further delays.

That being said, they aren’t the only ones, as Corriere dello Sport claim Inter have already made a number of moves to see if doing so was a realistic possibility for them.

The Italian newspaper claim they’ve set themselves the mission to try and ‘convince Tottenham to let Eriksen go in January’, and have ‘already spoken with the player’s agents’. 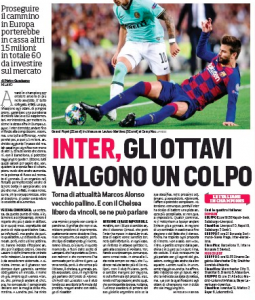 Furthermore, it’s stated that Piero Ausilio, Inter’s sporting director, took the opportunity to speak with Spurs directly during a recent visit to London.

However, they write ‘it appears the request was very high’, suggesting the price Daniel Levy had in mind was a bit more than anticipated.

But, and it’s a big one, all hope is not lost, as it’s hinted qualification to the final 16 of the Champions League could give them the cash boost needed to get it done.

West Ham and Aston Villa rejected, after it was claimed Hammers were close to deal

West Ham and Aston Villa rejected, after it was claimed Hammers...

Spaniard could be living ‘final days’ at Chelsea – Has ideas...